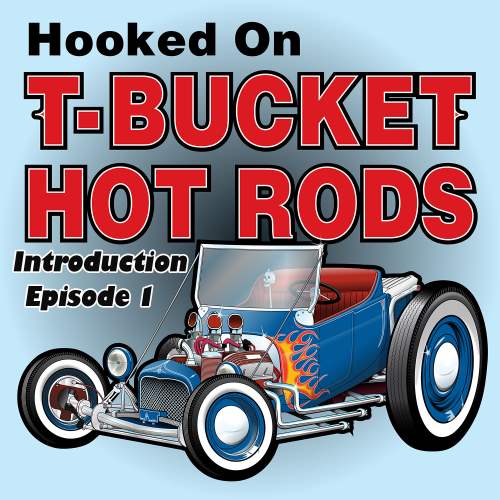 Click the blue button below to listen to this episode.

Following is a transcription of Episode 1:

Welcome to Hooked on T-Bucket Hot Rods. This podcast is all about T-Buckets, their hot rod history, the people who built them in the past as well as those who are building and enjoying them today. You’re going to learn the rich history of T-Buckets and you’ll discover tips and tricks on their construction as well as the fun of owning, driving and being a member of the active, growing and global T-Bucket hot rod community. We do it with fascinating interviews of the movers, shakers and history makers in the T-Bucket world that will entertain, educate, encourage and inspire you as a T-Bucket owner, builder, buyer or just fan. And you’ll be glad to know it’s all absolutely free.

I’m your host John Morehead, and I may be familiar to some of you because for ten years now I’ve been the guy behind the TBucketPlans.com website.

But, if you’re new here you may ask “What’s a T-Bucket?” The short answer is a hot rod roadster based on a 1915 to ‘27 Model T Ford style body. But there are also T-Buckets based on Chevy, Dodge, Willys, Studebaker, and other bodies of the teens and twenties, including home fabricated ones and a few mongrels you’ll discover along the way. Hey, we’re not elitist when it comes to T-Buckets. Our focus also includes coupes, sedans, tourings and C-cabs as well. If it’s got the basic T-Bucket elements we’re a fan and hope you will be, too. But that’s a subject for an episode in itself.

For a quick historic perspective, the roots of T-Buckets go back to the earliest days of Model Ts. By 1927, 15 million of them had been built, and that helped spawn the speed equipment industry. You see, in the 1930s it was possible to hop up a 4 cylinder Model T engine to produce 7 times its original 20 horsepower! And because of their light weight, which became even lighter when you cast off the fenders, hood and other unnecessary items, Model Ts were the most popular cars in every type of racing.

Jump ahead a quarter century to 1957 when television was starting to become popular, but the large format weekly photo journal, LIFE magazine was almost as important. Back then, there were some 50 million U.S. households and LIFE’s circulation approached 10 million, so it was read in roughly one out of five homes in the U.S.

When the late Norm Grabowski’s eye-popping T-Bucket roadster was featured in a full-page LIFE magazine photo it sparked a creative hot rod desire in tens of thousands of baby boomers who may have never even seen or thought about a hot rod before then.

The same year, Tommy Ivo’s equally legendary T-Bucket was featured in the movie “Dragstrip Girl” as well as in 1959’s “The Ghost of Dragstrip Hollow”.

Shortly after it’s LIFE magazine exposure, Norm’s T-Bucket started appearing in the popular television series 77 Sunset Strip which ran from 1958 to 1964. By 1960, 90% of American households had televisions. The exposure was huge! And the T-Bucket hot rod phenomenon had taken off, with the introduction of Cal Automotive’s fiberglass T-Bucket bodies.

Which brings us to what is and why a T-Bucket Podcast?
I’m betting that for many listeners this is your first podcast listening experience. That’s because street rodding is a hobby that demographically skews more to the baby boomer generation, of which I’m a member, and to be honest I only listened to my first podcast less than two years ago. I’d taken up walking for daily exercise and listened to music on my phone while doing that. But my music tastes are also kind of old and limited like my hot rod tastes and I got bored after hearing all my Skynyrd and Bad Company tunes umpteen times.
So, when I explored what the Podcasts app on my iphone was, I was hooked!

You see, I’ve been interviewing legendary and current T-Bucket builders for over 10 years now. From my interview notes I’d publish stories about them on my blog at TBucketPlans.com. But I’m not a trained journalist or professional writer and I always had the nagging feeling that I wasn’t able to properly convey some of the really great stories that were shared with me. Now, what could be better than recording and actually sharing those interviews directly with other T-Bucket fans!

Also, since I’ve been interviewing T-Bucket pioneers we’ve lost a number of them that I had the pleasure of speaking with. Not just Norm Grabowski, but also influential builders like Marty Holmann, Ted Brown, Don Kendall, Gary Glenn, Bud Lang and others. That emphasized the fact that we need to capture more of these T-Bucket pioneers’ words of wisdom to inspire generations to come.

Anyway, a podcast is quite simply a free audio program that you can listen to on demand, meaning whenever you want. It can be when you’re at home, in the car commuting to work, on the treadmill at the gym, doing yardwork or wrenching in the garage. I won’t bore you with any more details now, but if you’d like to learn more check out the show notes for this episode at our podcast website, TBucketPodcast.com. And some of you may already be on that site listening to this episode. You don’t need to have a smart phone to listen to our upcoming episodes because we’ll be posting them on our website at TBucketPodcast.com.

But you’ll want to be sure to subscribe. Why? Well, by subscribing to this podcast, you’ll automatically receive the latest episodes downloaded to your computer, phone or other portable device.

Actually, this podcast has been over a year in the making. And you may wonder why? Well, research has shown that quite a few podcasts fail and most that do don’t make it past the seventh episode. I didn’t want this podcast to fail, so I traveled all over the country interviewing what you’ll find are the most significant and interesting T-Bucket builders, owners and enthusiasts. I’ve got a solid 40 interviews in the can and now you’ll hear not one, but two new ones every week when you subscribe. And it’s all free. That’s what’s also wonderful about podcasts.

So, subscribe today and in the coming weeks here’s just a taste of what you’ll be able to hear that will entertain, educate, encourage and inspire you to embrace the fascinating world of T-Bucket hot rods.
• Tommy Ivo discussing how he built his hugely influential T-Bucket.
• You’ll hear “The Camfather” Ed Iskenderian tell about how he built his famous T roadster in the 1940s that still exists the way it was originally built.
• And did you know that “Big Daddy” Don Garlits’ ’27 T roadster was the basis for his first real rail job dragster?
• Although I never had a chance to record a conversation with Norm Grabowski before his passing, you’ll be fascinated to hear my interview the artist Von Franco who built what’s known as the best recreation of Norm’s Kookie T, but also the spot-on recreation of his earlier Lightnin Bug version.

So, be sure to join us as we take a deep dive into T-Bucket hot rod history, building tips and tricks, events and some incredible T-Bucket stories that will truly entertain, educate, encourage and inspire you as a T-Bucket owner, builder, buyer or just fan.

Thanks for listening and be sure to subscribe so you won’t miss a single episode.

For everything you need to know to build or buy a T-Bucket check out the plans and history at our TBucketplans.com site.

For the incredibly detailed StreetRod 101 DVD Library covering how to build a street rod check out our StreetRodPlans.com site.

For plans for building a Model A frame, Mustang II front suspension, Willys or Anglia Gasser frame or other hot rod building plans and DVDs visit our HotRodPlans.com site.

Our theme music is “My T-Bucket” by The Fractals a surf rock band from, of all places, the Duluth/Superior, Minnesota area. Every T-Bucket lover will want to add this to their music library and you can easily download it from Amazon Music. Or download all 16 great tunes from their “Death by Fender” album for only $8.99.

This site uses Akismet to reduce spam. Learn how your comment data is processed.